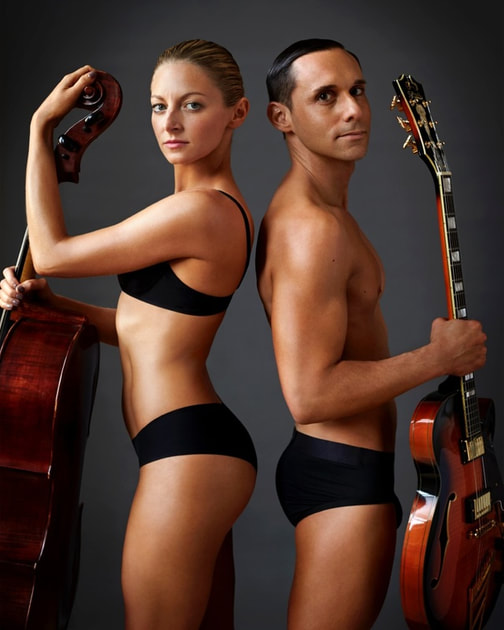 Have you heard our debut album? No more shivering with antici...pation! It's alive!

"Indie rock, alt-cabaret, new burlesque: Whatever you call it, the jolly musical comedy of the Skivvies, a troupe of entertainers who perform in their underwear, joyfully rock...Wielding instruments as if they were toys, the Skivvies’ leaders Nick Cearley...and his mischievous curly-headed partner Lauren Molina, treated the stage like a glorified sandbox for grown-up children. With their fellow musicians...they played jet-propelled, humorous mash-ups of songs from near and far in an accelerated jug band style...The Skivvies are paradoxically sophisticated and innocent...they tempt you to rush back to childhood and forward into the future at the same time." - NY Times

﻿"The Skivvies have managed to carve out a niche that we never knew needed to exist:
It's part Weird Al-parody and part sexy burlesque...an unusual explosion of satire and sultry."
- Out Magazine

"...At a Skivvies show, audiences will find love and friendship with their fellow humans, artists of varying ages, shapes, sizes, body types, all of whom are on stage to entertain, enlighten, illuminate and make people happy. There is no envy, jealousy, self-consciousness or self-loathing. There is no feeling of judgment anywhere. There is no negativity at a Skivvies show, only solidarity in art and companionship. Audience members will leave a Skivvies show happy that they came, glad that they participated, and feeling filled with humanity."
-BroadwayWorld

"The Skivvies are best thing to happen to NYC nightlife in years...a shot of pure joy to the heart...
A MUST-see! Repeatedly!!!" - Perez Hilton