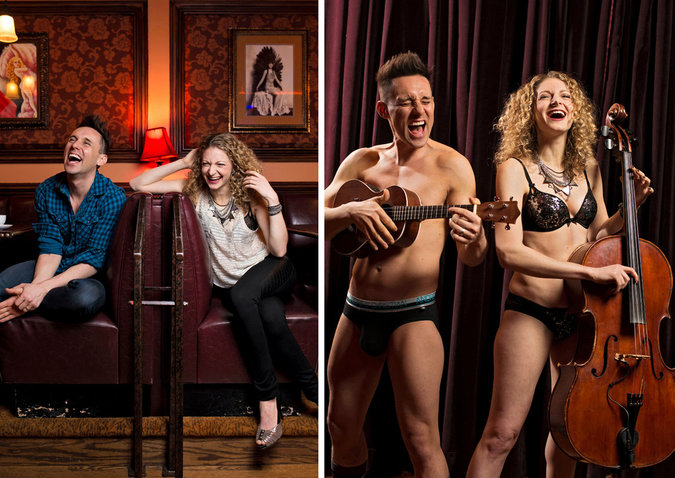 Photo by Karsten Moran for The New York Times

Here's what people are saying about The Skivvies:

PEREZ HILTON says, "What took me so long???? #TheSkivvies' monthly residency at 54 Below is the best thing to happen to NYC nightlife in years! The insanely talented duo of #LaurenMolina and #NickCearley - and their accompanying band - are more than just a cabaret act. They are a bonafide theatrical sensation! Yes, they and their guests perform in their underwear, but that's just a (smart) gimmick to get people in the door. It's their ferocious talent that keeps people coming back and smiling from start to finish! #TheSkivvies present and reinterpret pop songs, brilliantly arranged, and often mashed up in the same musical number. There is so much humor, inventiveness, real musicality and FUN being had on that stage. It's infectious! They are like a shot of pure joy to the heart! And all the Broadway stars they have join them at every show is just icing on the already delicious cake! #TheSkivvies are a MUST-see! Repeatedly!!! I can't wait to become a groupie!!!"﻿﻿﻿
NY TIMES "The Skivvies Rock Their Socks Off (and Other Clothes Too) NYTimes.com
NY TIMES "Undie Rock, With a Soupçon of Broadway" NYTimes.com
NY POST "The Bare Essentials" NYPost.com
NY1 with Frank DiLella - "Skivvies Strip While Stripping Down Pop Songs" NY1 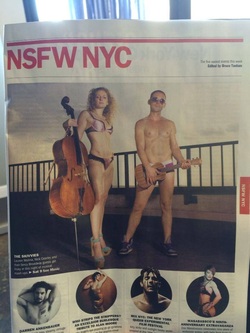 Interview with The Edge Magazine: 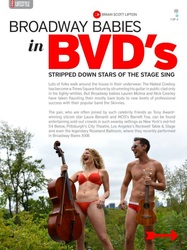 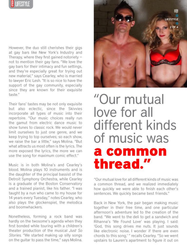 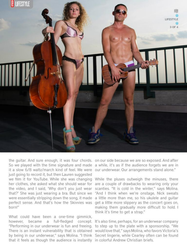 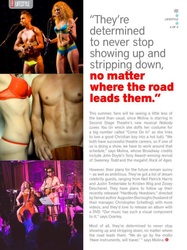 "...while indeed young and precocious, both performers are equally smart, with a sophisticated and genuine appreciation of all music genres that allows them to pull something off so rather ingenious..." - Wall Street Journal

"Ms. Molina might suddenly hit notes not heard since Minnie Riperton's "Lovin' You" while gracefully bowing the cello or smile warmly through a song with unprintable lyrics. Easygoing Mr. Cearley has a wide range on vocals and was apt to put down the ukulele or guitar at any moment in favor of a melodica or portable xylophone." - Pittsburgh Post-Gazette

"...a scantily clad 'Will and Grace'...with their talent, your head will say “They don’t need the gimmick,” but other parts of your body will shout, “Everyone should perform this way!” - Burgh Vivant

"Very talented musicians and a scream as comedians, Nick Cearley and Lauren Molina as the Skivvies don’t need a gimmick. Their close harmonies on pop songs, some of which date back to the 60s, and their cleverly composed ditties and sometimes bawdy ballads are enough to make them headliners in clubs and theaters across the US. Add to the mix a talented percussionist, a man not shy about adding to the levity by wearing some hilarious hats and getup, and you’ve got yourself an evening of entertainment to remember." - Pittsburgh Owl Scribe

"Molina and Cearley’s bodies are pretty perfect looking (we’re talking fully-exposed six-packs and chiseled arms), and their performance is about as unpredictable as it gets. The Skivvies is a wild experience..." - Blackbook Magazine

Features:
Cooking with The Stars at 54 Below: The Skivvies Grill Shrimp Theatermania.com
Last Minute Halloween Costume Tips From The Skivvies Playbill.com
Stripping in the Kitchen: "Kitchen Concert" with The Skivvies Theatermania.com
6 Broadway Stars Sing In Their Underwear Buzzfeed.com
Photo Call: The Skivvies at Joe's Pub Playbill.com
Interview with Frank DeCaro Sirus XM Radio
"Smash" Stud Wesley Taylor Covers Robyn, Carly Rae Jepsen In His Underwear Instinct Magazine.com
OMG, He covers Robyn in his Underwear; Wesley Taylor OMGBlog.com
They Found Love in a Semi-Clothed Place - Must See List Next Magazine.com
Morning Meme AfterElton.com
Getting Naked with the Skivvies - An Interview that girl allison
The Skivvies: Undressed For Success kenneth in the (212)